Can you tell us something about Houston Dutch Lions FC?

The Houston Dutch Lions FC is a soccer club based in the Greater Houston community, run under the European professional model and open to all players looking to improve their skills and cultivate a love for the game of soccer. Our goal is to develop young players by utilizing only top-quality professionally licensed coaches and the highly successful Dutch soccer philosophy.

Why did Houston Dutch Lions FC choose Texas to open a sport club?

According to FIFA the U.S. has more active soccer players than any other country in the world: 18 million! Of those 18 million, 78% are younger than 18 years old. Soccer is the fastest growing market in sports in the U.S. Plus, in the area of physique and mentality; American youth players generally exceed youth players from the same age groups from the top European soccer countries.

Texas is the energy capital of the world and is a major international center for many industries and services.

Texas is on the border of Mexico and is a gateway to all Latin America whose top sport is soccer. As of 2010, Texas had a population of approximately 25 million, where 37% of them are Hispanics. Texas has 4.3 million children with the age between 5-18 years old. Of these 32,000 children approximately 20% are engaged in soccer activities ranging from light plays to competitive sports. The weather of Texas is in favor where the possibility is there to have activities and sports all year round.

Ethnicity could be a large part of the target market for the Houston Dutch Lions FC; due to the fact that Americans tend not to be huge soccer fans (compared to Football, Baseball and Basketball) their main marketing strategies gear towards emigrates from Europe and South America who grew up loving the game of soccer or those Americans with strong European descents. This also ties into the location of the market being The Woodlands area with their main focus on The Woodlands and Conroe. Those people who live in The Woodlands tend to have high paying jobs and can usually afford the academy fees, events and attend a soccer match have season tickets and it definitely helps that in many residential areas throughout The Woodlands/Conroe there are large amounts of Hispanic people.

In terms of psychographics, the types of people the Dutch Lions FC is targeting are athletic, active, and outgoing individuals whose values and personalities all revolve around the sport of soccer. The Houston Dutch Lions FC is looking to provide high levels of entertainment to high- middle level users.

What kind of advice can you give to Dutch entrepreneurs who want to do business in Texas?

Learn the culture before anything. It is important to learn the values and beliefs of the people in Texas and from those with a Hispanic background. Before coming here, we were not aware how important it is to have an understanding about the diverse culture in Texas. The Spanish language is essential to do business, especially in the sports industry.

When we came here, we were highly focused on our Youth Academy, but once we finished building our facility, we got ourselves into new markets. Adult leagues and Pick-up Soccer were a market we were not yet familiar with. Fortunately, we had Hispanic colleagues helping us with the culture on dealing with that market. In the Netherlands people are not familiar with the ‘pay to play’ concept, so you can imagine that for us it took a while to adapt to this kind of culture.

Another thing to keep in mind is that the American culture are less straight to the point than Dutch people. When we hire people from the Netherlands (mainly soccer coaches) we teach them how to write a proper email, how to respond to phone calls, set up voicemails etc. We learned in our early years that some customers thought we came off ‘rude’ while in our eyes we just answered a simple question. Those small details can usually make or break a deal, to earn their trust or to lose their trust, make sure to dive in their culture first before taking the first step into the market. 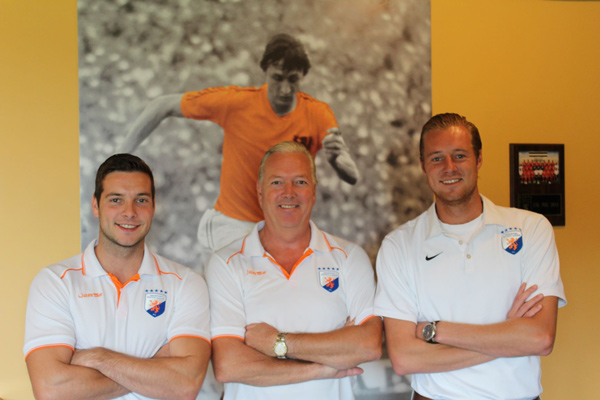