Can you tell us something about Amalia Dairy?

Boer Olke (Known from the Dutch television program Boer zoekt Vrouw), moved to Texas with his parents and seven brothers and sisters to Texas 30 years ago. In the meantime, he has built an enormous dairy farm, Amalia Dairy with more than 1400 milk cows. The farm of the 52-year old entrepreneur produces more than 9-million-liter milk per year. There are 17 employees on the farm, they all work with the cows and the young animals. They also cultivate the more than 1111 acers of land around the farm, farmland and grassland.

Why did your dad choose to set up a farm in Texas?

When in 1985 a so called ‘superheffing’ arises in the Netherlands, a fine for dairy farmers who produce beyond their milk production quota, the moment arrives for Olke’s parents to look at the USA for a possible location to expand their business. A realtor from Texas arrived in the Netherlands to advertise the farm life in Texas. Olke’s dad travels to Texas together with three three other farmers and he bought land four months after this trip. Olke’s parents buy an established farm with 120 cows. At that point in time it is still relatively easy to enter the American market. It is easy to start cheap with an investment visa. Olke inherited the company of his dad.

Olke implemented a few Dutch ways of farming in his company, like the cubicals for the cows (more cows in one spot), but also the raw materials for animal feed.

Nowadays it is not easy to set up a business as a farmer. You need to bring a lot of cash and running the business is way more expensive now. In order to survive, you’ll need a big farm. Also, the environmental rules and regulations are more tightened in the last few years.

When Olke’s dad started in Texas, there were 700-800 farmers. By now, Texas knows only 150 farmers. If your farm is too small, you’re not able to survive. If you own a bigger farm (a truckload of milk per day), you’re able to make better deals with de milk factory. Also, the procurement of equipment and the service from suppliers is way better.

Olke makes sure his professional knowledge is up to date by talking to a nutritionist about nutrition on a monthly basis. Besides that, he receives a lot of information from representatives of the nutrition industry and he talks to other formers to exchange knowledge. Olke sees himself more as a manager than a farmer and he is constantly looking for the best value for his money.

How do you distinct yourself as Dutch company from US companies?

We see opportunities and we don’t quit. When there’s land available, we buy it so we can have more cows. There are no restrictions. That’s how we could grow from 120 cows to 1400 cows. Americans in general are too afraid to take these steps.

Despite this growth and prosperity, Olke’s business has known tough times. A few years of extreme drought almost caused Amalia Dairy to go bankrupt. Olke also got in trouble with the banks. His faith and family got him through these years. Another bank was willing to help him out and the construction of the Keystone-pipeline and an electric mast on his land contributed to his financial recovery.

For the near future Olke has no plans to expand his company. The most important goal right now is to repay the debts.

A while ago, Olke’s cousin visited him in Texas and she suggested Boer zoekt Vrouw. Olke is willing to give it a try, because you never know what will happen when you don’t try. He underestimated the impact of participating in a television program like that on his private life. And in hindsight, he is not sure if he would do it twice. However, he is looking back with a very positive feeling and he sees the Boer zoekt Vrouw-crew as a big family who is very willing to help him out. Olke found his love, closer to home than he expected. The South-African American Karen also wrote a letter to the television program, but Olke ignored the letter at first because he was looking for a Dutch partner. But luckily it had a happy ending, because Karen is now Olke’s girlfriend.

What are the main differences between Texas and the Netherlands?

Texas is humongous. Most people underestimate the sheer size of the state. Texas has been an independent state in the past and even nowadays the Texans behave like that. The climate in Texas can be unpredictable. You can have long periods of drought, followed by floodings, hurricanes, but also long periods of very nice weather. The harvest needs to be timed with the weather conditions. It can be though in Texas, because you have to do it on your own. It’s hard to get the commitment from employers. With employment at will, employees can come and go as they please. Also, the mentality of Americans differs from the Dutch mentality. There’s more drama. Olke thinks the Americans are harder to get acquainted with; you don’t drop by for a cup of coffee in an American kitchen like I was used to in Friesland.

There are a lot of rules and regulations for Dutch farmers in the Netherlands. Texas has a more business friendly climate. It’s easier to expand your business here, there are no quota’s and you don’t have to get a lot of licenses.

What kind of advice do you want to give to Dutch entrepreneurs looking for business opportunities in Texas?
It’s very important to come prepared and to make sure you’re on top of every step in the process. Are the products compliant to the rules and regulations in the US? The US is known for the ‘sue culture’. But for good products, the US offers a lot of opportunities, because according to Olke: ‘People don’t judge, the respect what you’ve achieved.’ 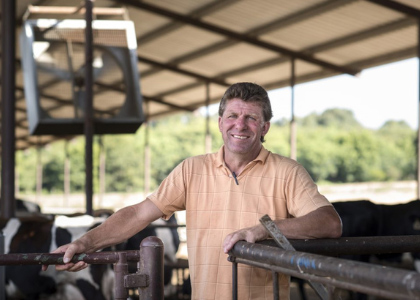