Finding an office in Texas

In addition to size and what the view is like from your desk, there are many factors to consider when renting office space for the first time in Texas.

Where to live
Commute times can be much longer than people are used to in the Netherlands since cities are so far spread across massive landscapes. It’s common for people to live in the suburbs where housing is more affordable and drive an hour to and from work every day. However, more and more companies are deciding to build their headquarters outside of their respective city limits so that their employees can live comfortably.

If you don’t want to drive too far and want the convenience of being close to many other commercial areas, apartments are a great living option to consider. All the major cities in Texas have modern, convenient apartments that can keep you close to work and the excitement of living in a big city.

Lack of public transportation
With the exception of some downtown districts, public transportation is extremely limited in Texas. American cities are developed with the car in mind, and almost all Americans rely on their vehicles to get around everywhere. Be prepared to get your state license and pay all the necessary costs, including yearly inspections and taxes.

Knowledge clusters
Certain types of companies sometimes gather all near each other to create districts. For example, Houston has the Energy Corridor with many companies specializing in oil, gas and renewable energy technologies and the Texas Medical Center, which is the largest cluster of hospitals and research centers in the world. San Antonio’s downtown recently has become a magnet for tech startups. Being near companies similar to your own makes networking easier.

Types of offices
Startups might want to consider accelerators and incubators. These places offer additional resources such as access to mentors, funding, networking events and more. Check here for a list of the main Incubators and Accelerators in Texas.

Well-established companies could consider buying their own building or constructing a new one. However, the traditional method of renting an office, space in an office, an entire building or just a floor are also available.

Where to start
Since finding a permanent office solution takes time, we recommend starting at a coworking space before selecting your final space to lease or buy. A coworking space has offices for multiple companies. They are typically smaller, less expensive and options start as low as just a desk in a common area. Additionally, many coworking spaces offer gourmet coffee, rooftop gardens, beer socials and other perks to attract potential tenants. Another advantage is that you can often apply for membership directly online.

Wework is particularly good for Dutch companies because they have offices all over the world, including Amsterdam, and your membership allows access to any of their locations.

However, if you feel your company is ready for a full-fledged office, a list of currently available offices can be found here.

Expected cost
Fortunately, office space in Texas is usually less expensive than other places in the United States, and companies can enjoy a much lower tax burden than other attractive markets.

Offices are usually priced at a dollar amount per square foot and can vary depending on amenities, location, how recently the construction took place, among other factors. If your office is downtown, it is important to verify whether the building offers parking. Most cities in Texas average $200 a month and up for parking contracts in downtown business districts. Aquilacommercial has a great breakdown of rent in Austin, Liquidspace has great resources for Houston, Instantoffice for Dallas and TransWestern has a report for San Antonio.

Finally, if you’re going to have employees or visitors, it is important to have liability insurance as the United States is more litigious than the Netherlands. Paying a small monthly fee will potentially save you thousands of dollars down the road. Read our guide here. 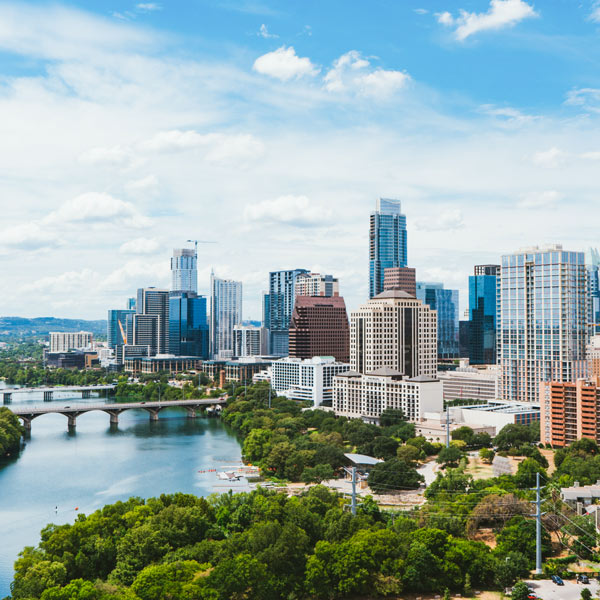